Ball scribes, pit gages and probes may be cheap and portable, but they are also unreliable and come with a real risk of misleading results.

Like the Optical Micrometer, these gages work by measuring the distance between a top and bottom surface. Unlike the Micrometer, they rely on a probe making physical contact with the lower surface. If the geometry of the pit prevents the probe from reaching the lowest point, it will give a false measurement result. It’s also almost impossible to hold the pit gauge still and at the same angle, making repeatability poor on anything other than a flat, smooth surface.

Finally, there’s a real benefit to seeing the damage because this can expose more severe hidden structural problems, like exposed substrate or an originating crack. 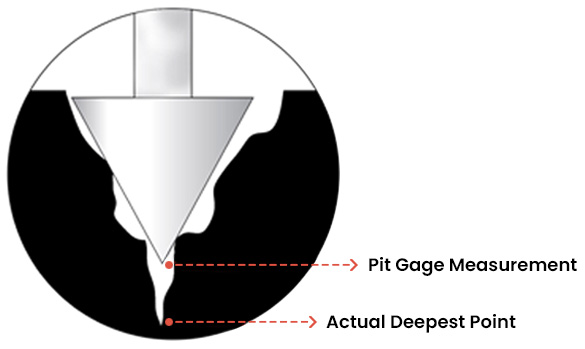 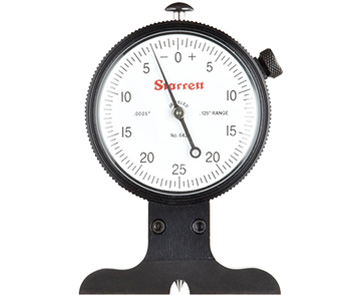 The study confirmed that the pit gage is very problematic in two common inspection scenarios: 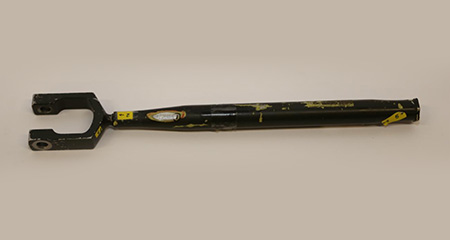 Control Arm
The damage to this Bell 206 Control Rod was located on a small diameter curve and near a raised area. This made it impossible for the technician to position the pit gage over the damaged area to take measurements. Therefore, this feature had to be omitted from the R&R comparison entirely. However, using the Optical Micrometer on a lab stand, the technician was able to repeatedly measure the depth of the damage at 0.0140″. 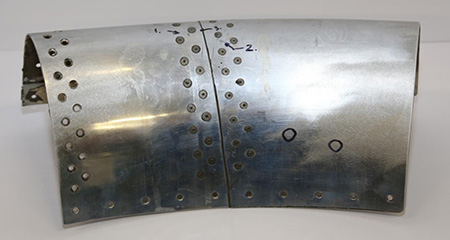 Jet Cowl
The pit gage measurements of the damage on this curved part ranged from a low 0.0090″ to a high 0.0110″, whereas the Optical Micrometer was able to hold a tighter tolerance with a narrower range from a low 0.0095″ to a high 0.0105″. This result is reflected in the results of the Main R&R Study Report, where the Optical Micrometer had significantly better results in both repeatability and reproducibility for all the measurements taken on the curved jet cowl. 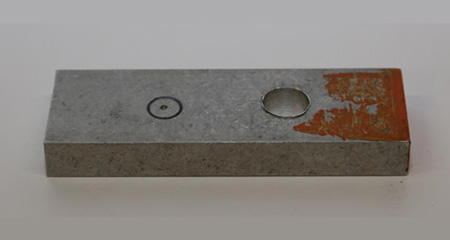 In this case, the report indicates that the pit gage performs better than the Optical Micrometer in terms of both repeatability and reproducibility. However, this is misleading because the pit gage was also giving an inaccurate measurement. The geometry of the pit prevented the conical probe of the pit gage from reaching the deepest part. The results in the Supplemental Study Report show a mean depth measurement of 0.0200″ from the pit gage, whereas the mean depth measurement from the Optical Micrometer was 0.0850, or 400% deeper. Pit Gages lend themselves to the very real risk of improper dispositioning from bad data and false positives. 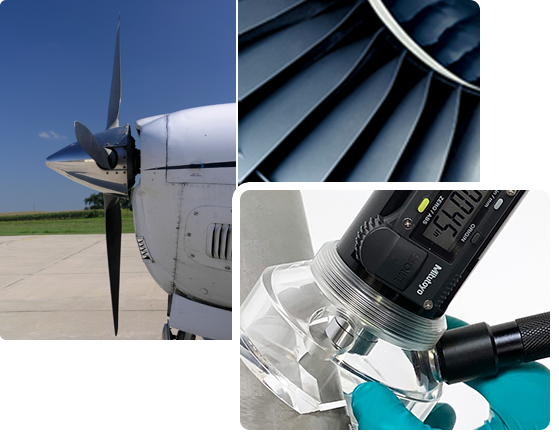 A leading edge is the front section of a wing, propeller, turbine blade, stabilizer, or other airfoil. During flight, leading edges are constantly being pelted by rain, snow, ice, sand and particulates in the air. This always results in damage and the surface becomes eaten away over time, leaving a rough profile. As the edge continues to erode, the coating wears away and exposes the composite structure beneath, which also can develop holes, cracking, splitting and delamination. The V-Block Base holds the Optical Micrometer steady on a curve, so it is ideal for measurements on a leading edge. It can measure the depth of a pit in seconds, giving confidence to repair and airworthiness decisions.

In most cases, minor surface damage doesn’t impact the performance or safety of an aircraft. Repairing dents, pits, and scratches is generally permissible within limits. A common repair is smoothing out the edges of the damaged area to prevent corrosion or future cracking. Buffing, blending, blasting, polishing, and peening differ in application, but are similar in that they all remove material to create a smooth surface. It’s critical to know two things before starting this process: what the repairable limits are, and how deep the damage is. If the deepest part of a pit is 0.004”, blending it out will still leave a 0.004” depression. If a scratch has penetrated the coating down to the base metal, it will still be exposed after blasting. There’s no point wasting time on damage that’s beyond limits. Regardless of why, if a part needs replacing, it’s best to know right away. In repair cases, it’s very helpful to know exactly how much material to removed so as not to inadvertently take off too much and compromise the repair. Proper dispositioning is key. That’s why an Optical Micrometer is an ideal tool to have on hand for “repair or replace” decisions. 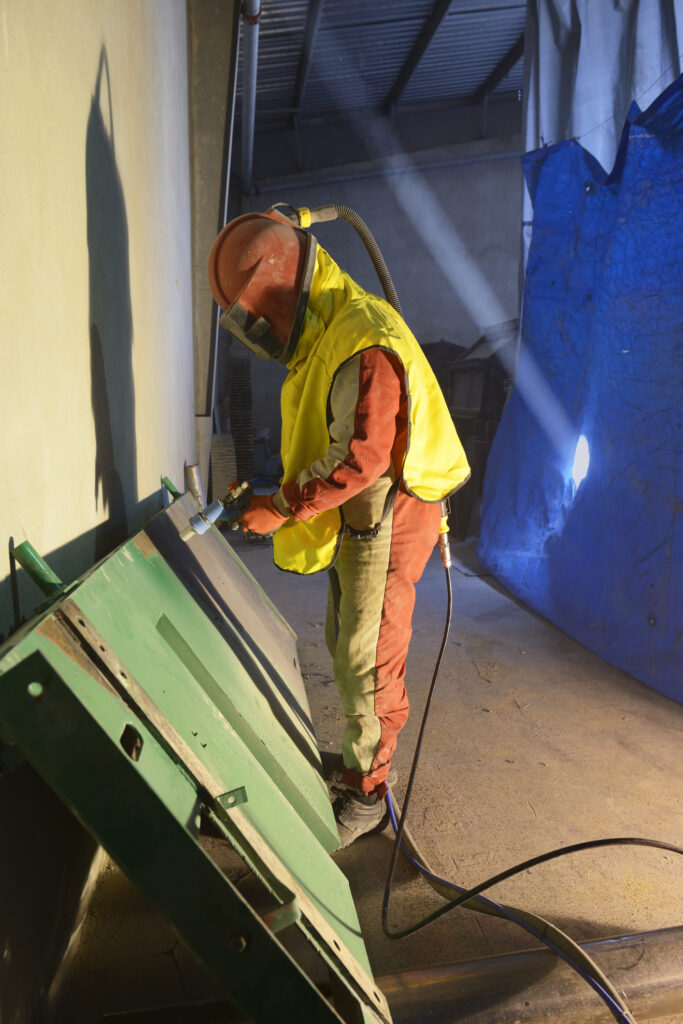 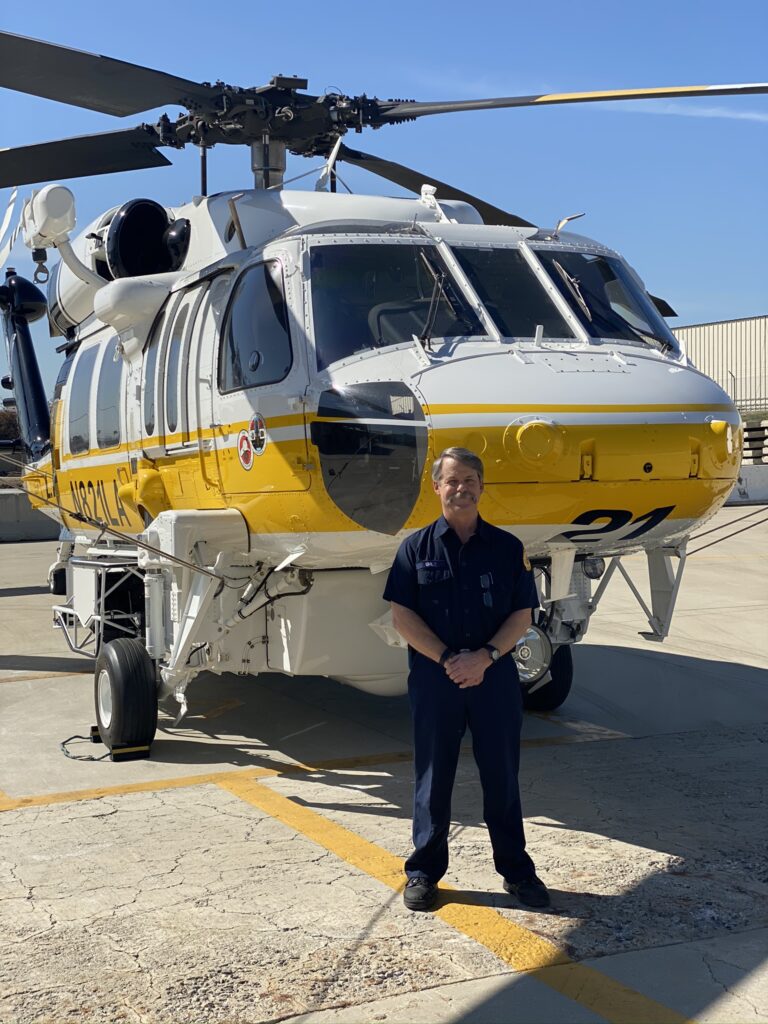 Los Angeles County Fire Department’s (LACFD) Air Operations has the critical mission of fighting California’s extreme wildfires and performing emergency air transport and rescues. Their aircraft maintainers have the huge responsibility of maintaining the fleet of light and medium helicopters and always ensuring readiness. The LACFD operates five Bell 412s and five Sikorsky Firehawks, including two new S-70i models added to the fleet in August of 2020.

Brian Uhl joined the maintenance team over 20 years ago as a line mechanic. Today, he’s a senior inspector and an important part of his job is determining if a damaged part is serviceable or not. He found a few minutes to chat with us about how he uses the Optical Micrometer to help him accomplish this essential task.

J Chadwick Co is immensely proud that our products are helping the team at LACFD Air Operations maintain their fleet and ensure readiness for their critical mission. Here in Southern California, we live with the almost constant threat of devastating wildfires. LACFD has an outstanding and beyond well-deserved reputation as an elite public safety operator. We are so thankful for Brain and the entire team at LACFD Air Operations for the amazing and essential work they do everyday to keep LA County safe.

Q & A From the Interview

When was the first time you used an Optical Micrometer?

I was at Bell Helicopter at the Van Nuys Airport doing an overhaul on a driveshaft. There were a couple of tubes and a mast pole that had already been scrapped. So I said, “well, I’ve got this scrapped mast. Let’s pull this thing [Optical Micrometer] out and see exactly how deep the scratch is.” I saved the mast. There was also a driveshaft tube that I was ready to scrap because it had some dents and I assumed it was bad. But when I put the Optical Micrometer on it, turns out it was good. The first time I used the Optical Micrometer, I saved two pieces, over $30K, right there on the spot. So that was my introduction and I said, “Oh I want one of these.”

So it’s safe to say you’ve gotten your return on investment on this tool?

Definitely. The first time I used it. If I had a personal shop and I had this tool, I would have saved my customers hundreds of thousands of dollars. I always want to try and save the part because I know the value of these parts are and how much our customers have to pay for new ones.

When did you get this Micrometer?

It’s been here since I’ve been here. So at least 20 years and it still works great.

What would be your biggest challenge without it?

I’m not the one that goes “when in doubt, throw it out”. There’s this rule of thumb that if you run your fingernail across a scratch and it catches, that’s 0.003” deep. But I know that with a scratch or dent there can be displaced metal around it that makes a raised surface like a burr. So when you run your nail over it, it seems like the scratch is deeper. The only other thing we have is a scratch indictor. It’s a pin on the end of a dial indicator, you put it over the scratch the pin drops to the bottom. But it’s only good on a flat surface, you can’t use it with a raised area or on tubing or curves.

When it comes to your maintenance operations, what’s your biggest challenge?

The biggest challenge we have is time. You saw those aircraft out here on the floor, all three of those are mine. I get the older ones, what we call the legacy aircraft. The legacy aircraft require more maintenance. So, when a helicopter comes in with damage in an area where there are damage limits, like a nick on the tail rotor blade; instead of taking the tail rotor off the aircraft to bring it in, which takes the aircraft out of service, I take out the Optical Micrometer and I can measure it on the aircraft itself.

You save time by not removing parts from the aircraft to bring them into the shop for no reason?

I think it’s safe to say that this is a product that you would recommend, if asked?

I have many times. In fact, when I worked at Bell Helicopter as an instructor, every class I brought this instrument up. I’m a firm believer. Some of the guys here have never used this thing before and when they find something, they call me to bring it up. I determine if the part is good, bad or indifferent. Then, I hand them the tool and train on how to use it.

When you do the training, they get it pretty quick?

Yes, they’re amazed how fast it is.

You do amazing work here. What is the most rewarding thing about it?

Being able to come out at home and look up and see an aircraft, that I signed off, flying overhead going to rescue somebody or put a fire out. 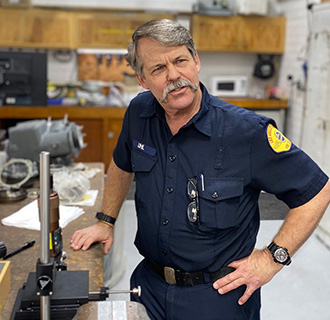 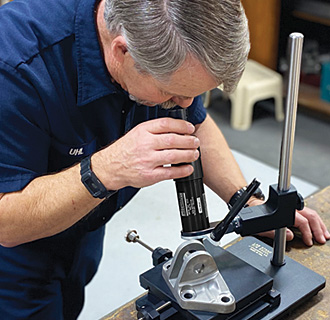 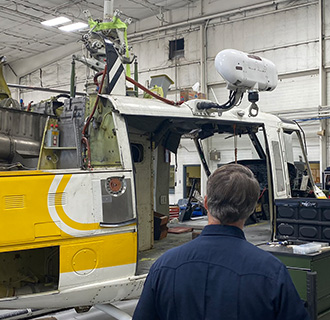 Several engineers were tasked with determining if a scratch on the hydraulic tubing on an F-15 was within the 0.005” damage limit. Using the 8400K, the main floor of the scratch was easily measured to be 0.004” and a more serious issue was revealed. At the bottom of the scratch was a tiny pit that was an additional 0.002”deep, 50% deeper than what had been previously assessed. The actual overall depth of the damage was 0.006”, out of tolerance, and the part was subsequently rejected. The conical tip of a pit gage would not have fit into down into the pit. Without visual confirmation, there is a very real risk of false positive results and bad parts being put back into service.

John Chadwick received an email from an inspector to let him know that “the first time we used your test equipment we saved a drive shaft from the scrap pile. QC gave it the usual “if it catches my finger nail it’s bad” check. I made them use your digital micrometer and it was good.”
The inspector wrote: “The inability to stabilize and place a [dial indicator pit] gage on a scratch that runs the circumference of a curved item was a large factor. The digital depth micrometer allowed for a stable placement. This eliminated variances of as much as ten thousandths of an inch. Also, based on the ability to look into the actual damage to the shaft, it was clear that the base metal had not been penetrated and that the damage was limited to the outer coatings.”

In just minutes, the 8400K more than paid for itself by saving a $10K part needlessly heading for the scrap pile.

The Air National Guard had an OH-58 tail rotor yoke with a clearly visible gouge. They needed to know the depth of the damage to disposition the part for repair, but were unable to get repeatable measurements with any of the tools in their shop. Using the Optical Micrometer, all three inspectors measured a depth of 0.008” and detected what appeared to be a crack propagating from the gouge. Where pit gages and dye penetrant tests had been inconclusive, inspection with the Optical Micrometer clearly identified a crack entering and exiting the gouge.